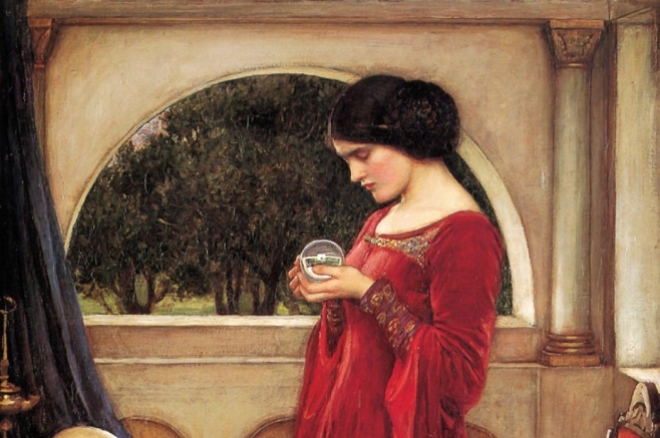 Having recently been separated, the querent came to me after a disappointing week of trying to regain the affections of his ex-lover, also male. An unexpected development came in the form of a dinner invitation from the quesited, but the date was yet to be confirmed. Naturally the querent was hopeful, but wanted to know if the plan for a dinner date would be confirmed, if they would be brought back together at this time, and if there was anything he could do to affect the situation to his liking.

Looking at the ephemeris, I noticed that Mercury next aspected Jupiter by conjunction across a sign boundary, and that aspect perfected the Saturday they were scheduled to meet again.

I was concerned that the querent was misdirected in his hopeful attitude seeing Neptune conjunct the Ascendant, and his significator combust the Sun. In asking the querent for background of the situation, the querent shared that the problems centered around fidelity and distrust. The querent was a bit of a showboat (Jupiter in Leo), and tended to attract attention whenever he went out. He didn’t make a big deal of others flirting openly with him, and often encouraged it. In his mind this was no issue as he had no intention of engaging with anyone other than the quesited, but to his partner this was cause for suspicion and it planted seeds of distrust.

Often the problems with Mercury/Jupiter relationships are those of status and modes of operation. Jupiter is the second-most superior planet, Mercury the second-most inferior. Mercury is quick, thinking a million miles per minute and needing frequent assurances that everything is as it should be (especially when in Cancer). Jupiter is far more liberal, relaxed and easy-going, and can’t be bothered with the constant reaffirmation of affections. The querent admitted that he was aware of this problem in their relationship. The quesited was regularly checking in with the querent to get a pulse on emotional standing, usually to satisfy some insecurity in the relationship that the quesited was feeling. The querent, however, didn’t invest much in calming those storms, and in true Jupiterian fashion responded a too liberally— “Oh, things are fine, stop fretting,” and “You have nothing to worry about, it’s just a bit of harmless fun.” Needless to say, this did nothing to alleviate concerns and instead fueled their fire, as it appeared to the quesited that the querent was side-stepping the issue. It’s important to note that Jupiter is in the radical 6th and turned 12th house for the quesited, further illustrating the quesited’s concern that the querent is an ill-match that will causes too much internal distress. Mercury’s placement in the 5th house of pleasure suggests that the quesited had come to see their relationship as a passing fling with no real commitment.

So will these two be brought back together? Mercury’s next aspect is to a conjunction of Jupiter, but as the chart stands this aspect is out of orb. Mercury has a traditional orb of 7º[1] so can only extend his rays to the 28th degree of Cancer. Jupiter remains outside of Mercury’s reach. Planets in orb are locked in, and their effects can be readily felt. Aspects outside of orb illustrate potential. Mercury will eventually reach Jupiter, yes, but being out of orb we cannot reliably judge on how that aspect perfection will play out, if at all.

It is worth mentioning that Mercury is only recently separated from a difficult square to Saturn in the 8th from the sign of Saturn’s detriment. This shows the heavy weight and disappointment felt by the quesited.

Before Mercury can meet Jupiter, Mars will perfect his square to Jupiter from the 8th house. The Moon is separating from the conjunction of the Sun, the 6th house ruler, to 8th-house Saturn, who is himself the ruler of the radical 12th house of self-undoing. These aspects carry a lot of unfortunate symbolism with them and are testimonies of disagreements (Mars), disappointment (Saturn), and the death of a relationship (Moon and Jupiter both in aspect to 8th house malefics). I told the querent I didn’t see any chance of them being brought together amicably, but if he had any hopes he would need to handle himself with some dignity as he works through this difficult time.

It was crucial to incorporate the conjunction of Mercury to Jupiter into judgment. The querent mentioned, as the impetus for this question, that the quesited had suggested they have dinner and “talk.” In real-time Mercury and Jupiter would perfect the Saturday following, so I informed the querent that they would have their dinner that evening. (They did.) The date went well enough to the querent, but it was later revealed that the feelings of excitement weren’t reciprocated. The quesited confirmed for himself that night that his heart had changed and that he no longer felt the affections he once did. This was coupled by a later admission (undisclosed to me as the astrologer — Neptune on 1st cusp) that our querent had been casually dating another man in the 2-week period since the break-up. We can now see the relevance of Mars’ square to Jupiter prohibiting Mercury’s conjunction, and the combust and turned 12th condition of Jupiter (operating with concealment and confinement). Things got a bit hot at that point in the conversation, and any ground made on a reconciliation was lost. On August 4th, 2014, at 4:31pm, the quesited told the querent that it was truly over.

Below is a bi-wheel showing the original horary positions and the planetary transits at the time of resolution, when the querent was informed there would be no further attempts to revive the relationship.

Notice that Venus, the ruler of the 8th house in the original horary, had come to an exact conjunction of the horary Mercury at 20º Cancer. This actualized as the querent’s gradual realization that the relationship was dead, past the point of return. In the resolution chart Mercury had moved to join the horary Moon, and Jupiter to the place of the horary Sun (exactly at 4º Leo). The luminaries bring things to light, so these contacts are indications that the reality of the ending relationship has come to the fore for both querent and quesited. The transiting Moon had recently separated from a conjunction of the horary Saturn and a square to the horary Mercury. Transiting Mars has also come to 5º Scorpio, squaring both the horary Sun and Moon — the truth about the querent’s interim relationship were revealed.

We can often see these connections in resolution charts timed for the moment when the original horary matter has ultimately perfected. These connections to the original horary serve to illustrate how horary charts, like all astrological charts, fold into a larger pattern of cosmic symbolism and movement. No chart stands alone; no chart, that is, that is derived from a concern sufficiently rooted in the soul stands alone.[2]

Connections seen in resolution charts have a lot to say for how we approach the topic of radicality, a subject outside the scope of this thread but sufficiently covered in Deborah Houlding’s “Introductions to Horary Astrology, Part 9: Considerations and Radicality,” published in the Aug/Sept 2014 issue of The Mountain Astrologer.

[1] While traditional authors have generally varied on the orbs of the planets, Mercury has been a relatively consistent consensus since the writings of Porphyry. An excellent table of orbs put forward by noted historical astrologers is made available on Deborah Houlding’s Skyscript website, link here: Table to Show the Moiety of Planetary Orbs by Various Astrologers Over Time.

[2] And these are the only charts we should entertain in horary anyway, as astrology does not make comment on flippant, idle curiosities.

This site uses Akismet to reduce spam. Learn how your comment data is processed.